At the risk of creating confusion right off the bat, I would just like to note that, for a southpaw, a right cross would be a left cross. But, for the sake of simplicity, I will refer to the right cross only for the remainder of this article.

With that said, teaching (or learning) how to throw a right cross in boxing from an article will be difficult. Your best weapon when learning different punches are videos or true coaches. But, we’ll do our best to teach you in this article.

It’s also important to practice this punch on your own. Check out our recommended heavy bags for your home so you can become more skilled.

Why Learn How to Throw a Right Cross?

In my opinion, the right cross is one of the more effective weapons in boxing because of the amount of power you can put into it. But it also consumes a lot of energy, so, unless you’re confident you can end the fight early, I wouldn’t recommend using this power-shot too often in the early rounds.

A lot of people think that the bigger and stronger you are, the more power you can put into your punches. Well, that’s not always the case. In some cases, technique plays a larger role in how powerful your punches are than shear strength.

So, I recommend learning proper technique first, before going all out on the heavy bag, both from a safety standpoint, and to prevent you from perpetuating bad techniques. Also, when you’re trying out new punches, I suggest you use gloves with sufficient padding to guard against injury.

The importance of lower-body mechanics

Like with every other punch n boxing, learning how to throw the right cross correctly and effectively requires learning how to assume the proper stance – at an angle with your hands held high and your elbows in tight.

Many observers may think you will be unable to generate a lot of power from this stance, but by putting your lower body into it, you can generate a tremendous amount of power. And, that power is magnified with a punch like the right cross, while at the same time, allowing you to protect yourself in the process.

The right cross works by generating as much torque as possible when you twist your hips to throw the punch so that the right side of your body is moving toward your opponent at tremendous speed. So, when you complete the punching motion, your right hip would have twisted so far that it is out in front of your left hip. To perfect this motion, start by doing it slowly, then pick up the pace as you get more practice. 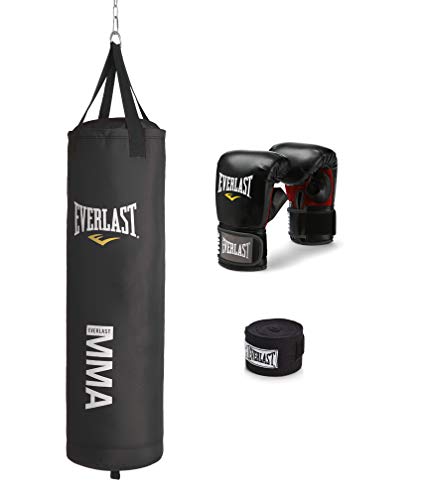 Check Price on Amazon
If you click this link and buy something, we may earn a commission at no additional cost to you.

Don’t forget about the position of the elbow

One of the things I’ve found extremely difficult to do is to keep track of the positions of my elbows when working out with the heavy bag, pad work, sparring, or anything else for that matter. However, it is critical to hold them in as close to your body as possible, especially if you’re just starting, as nailing down the fundamentals is crucial to a solid defense.

One of the hardest things in the world is trying to prevent your arms from winging-out away from your body when you’re in the process of throwing the right cross. Especially in the latter stages of the round.

Now, I know this position will feel unnatural at first, but take it slow and continue to work at it and you will begin to get used to it. Another thing: as you’re throwing the right cross, rotate your fist so the when it reaches its target, your palm is facing down toward the floor. Then when you retract your arm back to its cocked position, mimic the same motion on its return as you did when you threw the punch.

Make your shoulders be part of your defense

When you throw the right cross, the last thing you want to do is open yourself up to being counterpunched by your opponent. Therefore, when you explode your right arm out to deliver a killer blow, remember to keep your chin tucked into your elbow so that your shoulder forms a natural bulwark that protects you from incoming blows.

Now, this might not seem like a lot of protection ar first, but when you think about it, with your chin tucked safely into your right shoulder, and your left hand guarding the right side of your head, you’ll have formed a pretty effective barrier against an incoming attack.

Even though the right top-side of your head may be a little exposed, it will still be difficult for your opponent to land a clean shot on such a small target. The best he could hope for is a few glancing blows.

This philosophy might be a little difficult to comprehend at first, but, if there’s one thing I know for sure is to keep “defense” at the forefront of your mind, if you want to be a successful boxer. This is no small matter; if you don’t figure defense into your strategy with the same degree of urgency as you do offense, then you might not be as successful as you might’ve been.

By taking into account your vulnerabilities throughout a punch, incorporating defense into the punch will become more natural. Once this becomes part of your thinking, you can bring on a teacher and incorporate your new-found philosophy with the expertise of the trainer and use the right cross to maximum effect and power.

Now, it may be difficult combining two of the game’s most potent weapons, but, with practice, you’ll have it down pact before you know it. It will become as natural as riding a bicycle. When you reach this point, it will then be time to move on to the left hook.

"Mad" Mike has over 20 years of experience in Boxing, MMA, Muay Thai, BJJ, Kickboxing and various other forms of Martial Arts. He has coached "a handful" of champions and professionals. Due to agreements with current athletes and sponsors he must post anonymously. Feel free to ask him any questions (except his true identity)!